International Award-Winning Author Seconde Nimenya Presents a Leadership Roadmap to Embracing Change.
How do you discover who you are and honor your true self when faced with adversity?
How do you use it to evolve and achieve your life purpose?
In her memoir, Evolving Through Adversity, international award-winning author Seconde Nimenya answers the above questions, and demonstrates that the best way to get through any adversity is to go through it, and learn from it.
In this honest and soul-searching book, Seconde recounts her life growing up in her native country of Burundi in Central Africa, and her journey to North America; including fighting to obtain an education, learning hard lessons, and becoming a voice for others. This is a story of a woman’s survival through much adversity, and who finds incredible potential within herself. The book is filled with lessons of perseverance and hope; overcoming, and finding peace from within.
After reading this book, you will be inspired to achieve first your own personal growth, and then empower those in your community and in your world. You will learn how you can rise above adversity, discover your passion, honor your true self, and live the life purpose you were created for.
Category: Books 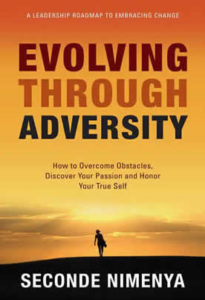 10 reviews for Evolving Through Adversity

Only logged in customers who have purchased this product may leave a review.